As much as a quiet last weekend in Madrid did sound nice, I took my last traveling opportunity and left for England. Of all the countries I visited this semester, England was my favorite, followed by Spain and Brussels. Part of my love for England is likely due to the fact that I managed to leave London and see more of the country. 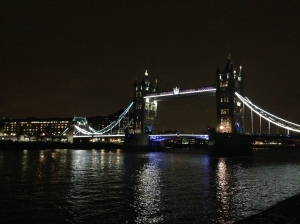 Tower Bridge (not to be confused with London Bridge, which is actually small and disappointing)

Without a doubt, we wanted to see London, so we spent the first day and night in the city center. We saw the major sites (Buckingham Palace, London Eye, Tower Bridge, etc.) and ate fish and chips. Before all this, we took a trip back to America. We ate Chipotle and I shopped at J. Crew and Anthropologie. 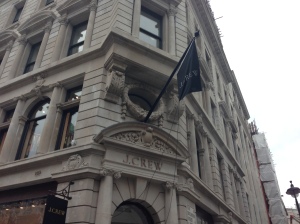 I proudly say I bought nothing!

Except then I bought a shirt at Anthropologie. After all, I had no hope of resisting both my favorite stores!

The next day, after scrambled eggs for breakfast, we took the train the Stratford to meet my friend’s friends. The family warmly welcomed us into their home, fed us and showed us around. We saw Shakespeare’s birthplace, which, by the way, is older than the United States (yes, my friend Christian asked that) and went to a cafe for afternoon tea.

The following day these friends took us to Birmingham for the Christmas market, which is the largest in Europe. It was indeed very large, and warm cocktails and sausages were the specialties. 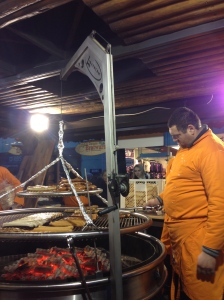 Even though I’m somewhat still in denial that this was my last weekend, it was a pretty spectacular one.

I’m Taylor. I’m 21 going on 45. Entertaining gives me more joy than anything else, I spend more time with elementary school children than my classmates, and I attend women’s Bible study on Tuesday nights. Despite my mother-like tendencies I am a college student studying communication. I love sharing cooking tips and life’s funny stories. Journey with me!